We Never Looked Back! 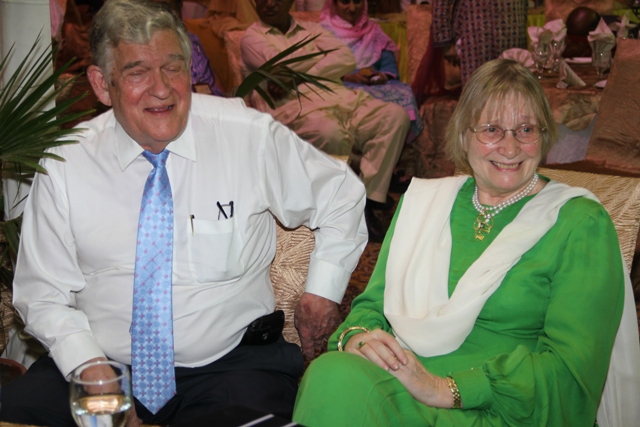 The author with her husband, Dr Peter Armaocst, at a farewell dinner given by staff and faculty, July 2012

In June, 2002 Peter was offered and accepted the position of Principal of Forman Christian College. After two subsequent visits in 2002, he felt strongly that we needed to move to Lahore in order to prove to the government that we were serious about having the college denationalized. The Governor at the time was facing political difficulty in denationalizing a number of colleges all at once.

We moved lock, stock and barrel, as they say, on January 11, 2003 and we never looked back. We could not have received a warmer welcome from the business community, the university community, the alumni and the Christian community. We were invited into people’s home for dinner and made to feel instantly welcome. There were forces, however, that clearly did not want the college to be denationalized. They were fearful that jobs would be lost and that the tuition would be raised. The government promised that all the faculty that did not stay at Forman would have jobs elsewhere. There still was a good deal of unrest, however. Groups visited our home several times, making threats and breaking a few things. A coffin was made with Peter’s name on it and taken around the Parliament Building. There was graffiti saying “Go back, Peter, Go Back!” However, it soon became clear that we could not be “frightened” and that we had no intention of leaving. The Government denationalized Forman Christian College on March 19, 2003 – a glorious day in the life of the college and in our lives.

The next months were filled with activity – selecting new faculty and deciding on the staffing. Faculty and staff – Muslims and Christians – men and women – all worked together for the good of the College. It was determined very early on that one of the keys to success would be to become a university and to grant our own degrees. With the help of President Musharraf, this was granted in 2004!

Looking back on that first year, my memories are of overwhelming gratitude to all within the college, the alumni, the Christians and the broader community who were so welcoming, so encouraging and so grateful to Peter for all he was doing. I was also incredibly proud of my husband – of the way he systematically worked with all constituencies of the college to achieve success and to do so under, at times, great pressure. Our ten years were a true gift to us – one we will never forget and never cease to be grateful for. This gratitude is for the Muslim and Christian communities – faculty, staff, alumni, board and students who vowed to work together and who created a peace-loving campus devoted to the life of the mind. Thank you all!

Author: The author is President Emerita of Moore College of Arts and Design; Senior Associate at the Institute for Research on Higher Education at the University of Pennsylvania; and a Senior Fellow, Office of Women, the American Council on Education. She is married to Dr Peter H Armacost who served as Principal FCC (2002-2004) and Rector FCC (2014-2012).