The Day of the Locusts

Home » A Piece of the Past » The Day of the Locusts 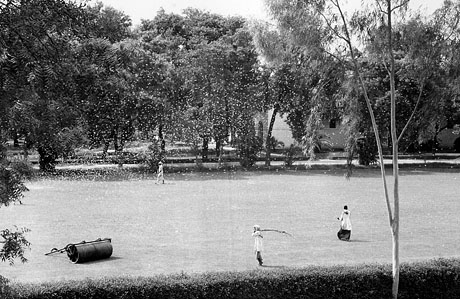 …I’d like to share an “outside-in” perspective on my childhood that was similar in many ways to the Anglo-Indian experience during the first half of the twentieth century.

My parents moved to West Pakistan, the western portion of this new country, in 1952, a short five years after Partition. It was to be my childhood home for a decade. My sister hadn’t even reached her first birthday. I was an impressionable, curious, but less than cooperative two-year-old…

…We lived in several places. Our first home was in the dusty rural village of Raiwand, connected to the rest of the world by the railroad, and to other villages by worn footpaths alongside the canal banks and rutted roads etched into the earth by heavily-laden bullock carts. Within a year’s time, we moved to Forman Christian College, a well regarded, men’s private educational institution, in the vibrant city of Lahore. My father taught English before finding his niche as a history professor. My mother employed her nursing skills by volunteering to keep United Christian Hospital patients’ charts and record up-to-date—each one written entirely by hand…

…We experienced the locust swarms, spring of 1962. They descended over Lahore’s Forman Christian College campus like a swirling dust storm. My sister and I, my folks as well, dashed up to the second story verandah to have a locust’s eyeview of the green lawns, trees and hockey fields beyond the eucalyptus row and hedge.

Mom recalls “bugs being everywhere.” Victoria remembers “going up on the roof…and banging pots with spoons,” which the wise adults informed us would deter the ravenous locusts – a type of huge grasshopper – from devouring the sports fields and denuding trees. (From my mature vantage point as an enthused gardener, the veracity of this practice seems dubious.)

I do recall great excitement among the household adults, staff and my folks alike….a mix of anticipation and alarm….with little comprehension on my part for its basis. I also remember watching more experienced Pakistanis chasing them off the lawns and knocking quantities of locusts out of the sky and with big colorful cotton cloths. After 48 intervening years, none of us can recall if there was much damage done. 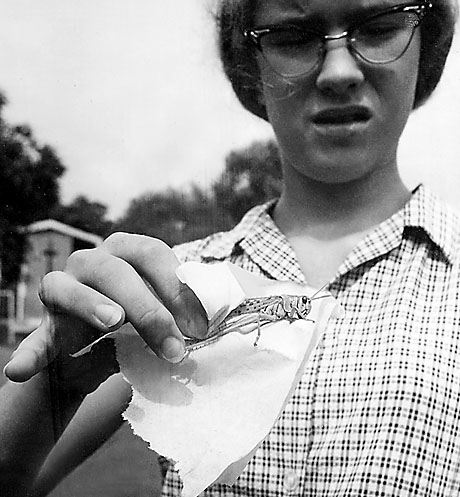 Our family of four sat in designated places for dinner as usual. Sunlight slanting through the tall windows behind my back as we waited for the meal to be served. At some point, our cook and bearer from #15 (our house on the FCC campus) proudly brought us a heaping plateful of deep fried locusts — a special delicacy for us to try and (as my Dad writes) “served voluntarily as a learning delight for their sahibs.”

As it turned out to somewhat mixed reviews! Not terribly fond of insects, I remember doubting the edibility of giant grasshoppers. Certainly never had realized they were a food source for people! The platter of toasty brown bugs  seasoned ‘just so,’ was presented to my mother according to the proper etiquette of ‘Ladies first.’

I jumped up unabashedly to peer over her shoulder at the exotic fare….torn between proper politeness and utter horror! Tentatively…plucked a roasted locust from the pile. And managed to take a bite. Crunchy. And tasty (much like a barbequed potato chip)! One bite was all I could chew…and swallow. Dining on bugs was NOT for me…no matter how delicious! Dad continues “We remember sitting at the dining room table and trying to chew down the fried locusts…Not much delight on our part, although we tried.” Victoria adds “…but I don’t remember ever eating them. I WOULD NEVER EAT THEM, NOT THEN, NOT NOW!!!!!!”