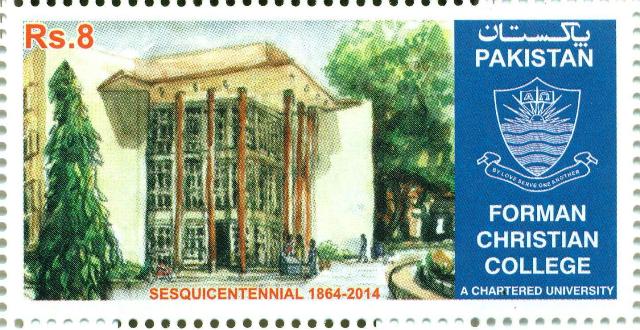 On Wednesday 14 May 2014, Pakistan Post issued a stamp highlighting FCC’s sesquicentennial. For those who don’t want to go to the GPO, panes of 15 stamps are now available from Ms Eileen Dass’s office at the cost of Rs 150. Pak Post has also issued a first day cover and an accompanying leaflet, shown below. A limited number of first day covers will be available for sale from Tuesday 20 May 2014.

Here is an extract from the leaflet:

“To commemorate the great achievements of FCC, in its sesquicentennial year, Pakistan Post is issuing a stamp which depicts Sinclair Hall, constructed to mark the centenary of FCC and completed in 1971. Named after a devoted principal, Dr EJ Sinclair, who served FCC for over fifty years as a faculty member and from 1962-1968 as Principal, the building was designed by architect Nasreddin Murat Khan who also designed the Minar-e-Pakistan. One of the most recognisable buildings on campus, the depiction is by watercolour artist Anjum Zaheer. As FCC celebrates its 150th anniversary in 2014, it is proud of the legacy it has inherited and aware of the responsibility this places on it as educators of the youth of Pakistan, and indeed the region.”