Home » A Piece of the Past » Moving Home 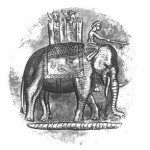 During these early years in Lahore the problem of a suitable residence for Dr. Forman and the Newton family was very real. Suitable houses were scarce and had to be given up whenever necessary for military officers. During one period of about six month the Lieutenant Governor, Sir Henry Lawrence, insisted that the Newtons and Dr Forman live with him. They were able finally to occupy the house of a Frenchman, General Court, who served with Ranjit Singh. This house was near the mausoleum of Nazir Khan, 2 ½ miles from Lahore Railway Station on the way to Amritsar. The Newton family occupied the house and Dr. Forman the mausoleum. Their goods were moved to these new quarters by elephants provided by Sir Henry Lawrence. Flies were apparently as bad then in Lahore as they are now, and we read of an interesting way of disposing of some of them. The Newtons, at least the children, would get together some gunpowder, mix it with sugar and spread it on a table. When the mixture was black with flies a match would be touched to it and the whole go up in smoke.

S. K. Datta, The History of the Forman Christian College: Selections from the Records of the College 1869-1936.
Image: www.nabataea.net