Home » A Piece of the Past » Lord Byron’s Lost Letter 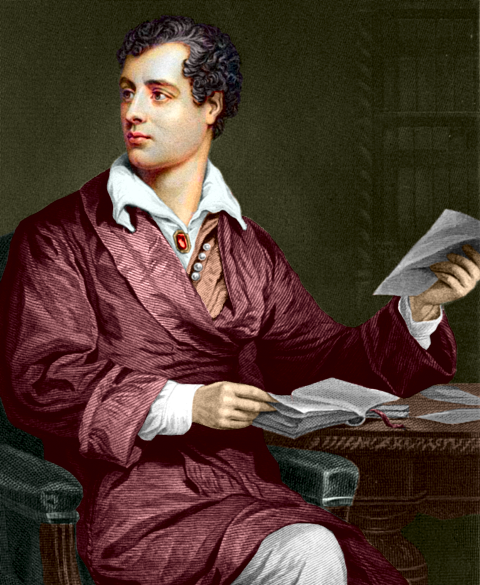 In the last Will and Testament of the late Rev. W. J. P. Morrison, M. A., it was provided that three hundred volumes of his library should be given to the F. C. College. For the purpose of making a selection of these books, we [Dr. Griswold et. al.] went to Dehra [Dun], on the 17th ultimo, and spent an entire day in choosing from some two thousand volumes, the three hundred best suited to our needs.

These will soon be on our shelves and will constitute a very valuable addition to our Library.

Among the books referred to is a copy of Byron’s complete works published in 1826. At sight of this old volume the archaeological instincts of our companion were stirred and he proceeded to glance through the book, when he was rewarded by discovering, pasted within the front cover, an autograph letter of Lord Byron, written from Venice on April 27th, 1819.

How the letter came to be placed within that book, and through whose hands the treasure may have passed during the years since it was written, we shall probably never know. The letter is in a good state of preservation, and its contents consist of a very sprightly protest upon the part of the poet, against a statement which been made to the effect that he was the author of a certain book and had lived in a certain place.

We here give it in full:

In various numbers of your journal I have seen mentioned a work entitled “The Vampire” with the addition of my name as that of the author. I am not the author, and never heard of the work in question until now. In a more recent paper I perceive a formal annunciation of “The Vampire,” with the addition of an account of my “residence in the Island of Mitylene,” an Island which I have occasionally sailed by in the course of travelling some years ago through the Levant, and where I should have no objection to reside, but where I have never yet resided. Neither of these performances are mine, and I presume that it is neither unjust nor ungracious to request that you will favour me by contradicting the advertisement to which I allude. If the book is clever it would be base to deprive the real writer, whoever he may be, of his honours; and if stupid, I desire the responsibility of nobody’s dulness [sic] but my own. You will excuse the trouble I give you; the imputation is of no great importance, —and as long as it was confined to surmises and reports—I should have received it as I have received many others in silence. But the formality of a public advertisement of a book I never wrote, and a residence where I never resided is a little too much; particularly as I have no notion of the contents of the one, nor the incidents of the other. I have, besides, a personal dislike to “Vampires,” and the little acquaintance I have with them would by no means induce me to divulge their secrets.

You did me a much less injury by your paragraph about “my devotion” and “abandonment of society for the sake of religion,” which appeared in your Messenger during last Lent; all of which are not found on fact. [Here about a dozen words have been erased by the writer]. You see I do not contradict them, because they are merely personal, whereas the others, in some degree, concern the reader. You will oblige me by complying with my request of contradiction. I assure you that I know nothing of the work or works in question, and have the “honour to be (as the correspondents to Magazines say) “Your constant reader”and very obedient, humble servant,
BYRON.

Source: The Forman Christian College Monthly, Vol. II., No. 6., April 1905.
In a later publication,  The History of the Forman Christian College: Selections from the Records of the College 1969-1936., Dr S K Datta writes:
“Apparently this letter has never before been published, at least it has not been traced. The book of Byron’s poems, however, is missing from the library; there is no note of where it went, and with it, of course disappears the autographed letter.”
Note: The Rev W J P Morrison was the first chair of English Language and Literature at FCC.
Image of Lord Byron is in the public domain.