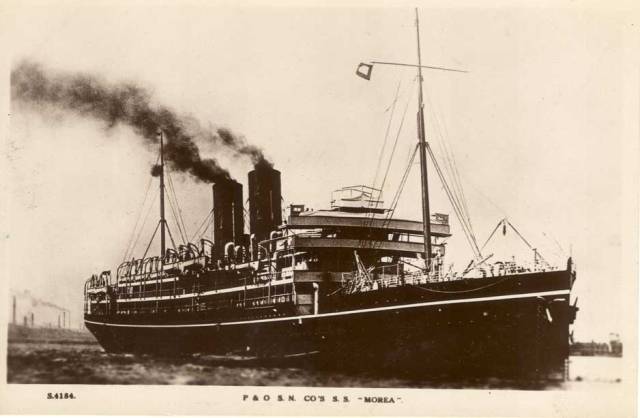 In accordance with a request of your editor, I am writing a short sketch of my voyage, which I hope may be of interest to some.

We lost sight of land at about 4:00 p.m. and saw only water and sky, with an occasional boat between, for the next six and a half days. The weather was cold and damp during about half the Atlantic trip, and the other half was warm and sunny.

There were deck games outside and cards inside, for those who were interested. There was also a good library and plenty of pens, ink and paper for those who preferred to indulge. The constant vibration of the boat, due to the engines, afforded a ready excuse for illegible writing.

At 7:30, Saturday morning, some of our passengers were landed at Plymouth; other left us at Cherbourg at about noon and the rest of us landed at Southampton at about 6:30.

We had about 67 second class passengers many of them only third class people. There were about 57 varieties, little, middle and big; good, bad, and indifferent. A fat mill owner, a thin man who was intoxicated most of the time and wanted to talk politics all the time; a “manufacturer” of antiques and a girl not especially noticeable for beauty who was quick to take every opportunity to talk with the sailors or any other young man who would not avoid her. There was a young English lady, not more than 45 and unmarried, who spent part of her time trying to get a definition for “love” from the men. I suppose such people are to be found everywhere.

The special train which took us to London was rather interesting to me. It was made up of about 12 “carriages” each of which had three compartments, and it was mounted on four light wheels. The locomotive weighs about 40 tons but seemed to haul the light train with ease. The largest English cars I saw are not half as large as the ordinary American cars. The coal cars, “goods cars” and box cars have a capacity of about 10 to 15 tons.

There were many things which to me were most interesting. While there, I visited Westmister Abbey, St. Paul’s Cathedral, the Tower of London, Houses of Parliament, which was not open to the public, the National Art Gallery, British Museum, etc.

Having met Dr. Ewing in London, I sailed with him from Tilbury Docks on the R. M. S. Morea, Aug. 23 1912. At dusk of the same day we passed the white cliffs of Dover. After several days of cold weather, we came in sight of land near Lisbon and from that time on we had fine weather.

We stopped for about three hours at Gibraltar, one day at Marseilles, one day at Port Said and about 9 hours at Aden where the Bombay passengers were transferred to the Salsette, the Morea being an Australian boat. At each stop except the last one, I was ashore seeing as much as possible of the strange cities.

It was all new and intensely interesting to me but I can’t take time and space to make comments on what I saw.

We reached Bombay on time and after spending about 10 hours there, I began the trip up country which lasted about 38 hours.

The country along the railway line in places is not very different from that of Pennsylvania. There seemed however no limit to the number of small mud villages built on the ruins of ancient buildings. There were also a great number of old forts, temples and castles, etc.

I arrived at Lahore on Sunday morning and was met at the station by some of the young men of the College who found a garri, an old two-wheeled, covered vehicle, and loaded me and my baggage in it.

We started off at a good pace, the other young men on bicycles. After going along well for a time, the horse became frightened and ran off, upsetting the garri with me, and the garri was ruined and the horse hurt somewhat.

Lahore is one of the oldest and most interesting cities of India, I am told. The European section is a very beautiful little city of a mixture of Eastern and Western scenes.

Thus far I have met only people of the highest type and I am very much pleased with things in general.

With best wishes for Big Run,

Printed in the Big Run Tribune in 1912. Copied from the original by F Raihan, 1958.
Image of RMS Morea courtesy of www.shipsnostalgia.com

Notes:
1. The Big Run Tribune was a weekly newspaper printed from Big Run, Pennsylvania, USA, from 1897 to 1926.
2. Prof J M Benade started his career in the Physics Department at Forman Christian College in 1912 eventually retiring as its head in 1957. He visited FCC for the Centenary celebrations in 1964, and was asked to serve as head of the Physics Department again, which he did from 1965 to 1970.
3. The transatlantic ocean liner RMS Oceanic, on which J M Benade travelled from New York to Plymouth, England, made her maiden voyage in 1899 and till 1901 was the largest ship in the world. In 1914 she was commissioned into the Royal Navy as an armed merchant cruiser, becoming H M S Oceanic. She was wrecked off Shetland later that year.
4. The R M S Morea was launched in 1908 as a passenger liner, used as a troop carrier in the First World War and after 22 years of service, sold as scrap in 1930.