Founding of “The Fifteen”

Home » A Piece of the Past » Founding of “The Fifteen” 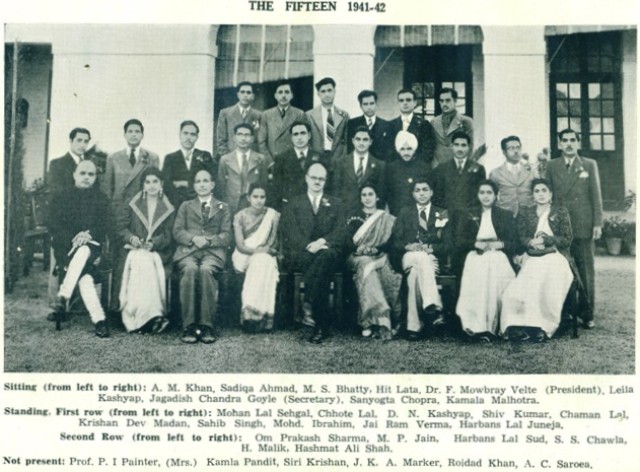 Mowbray Velte first came to this country when he was hardly one year old in 1894, and then as a short termer in 1915, the youngest and handsomest member of the Forman Christian Staff, hardly distinguishable in age, appearance and temperament and activities from his pupils with whom he mixed so freely. During his brief stay of three or four years he founded the famous ‘Fifteen’ the premier literary society of the college and the province. Among the first members of the ‘Fifteen’ were distinguished gentlemen like Shi Gulzari Nanda, Mr D. K. Sen both of them holding supreme positions in India as senior member of Pandit Jawahar Lal Nehru’s cabinet and Prime Minister of Patiala respectively, Principal Khanna, A. N. Das Gupta, C. L. Aggarwal and myself and the deceased Mr Mohammad Aslam, Income-Tax Commissioner and S. Kartar Singh Advocate.

The ‘Fifteen’ founded in 1916-1917 has continued now for more than forty-five years. The idea behind the founding of the ‘Fifteen’ was the revival of the traditions and achievements of the Literary Club, founded by Dr. Johnson during the eighteenth century of which he was the Founder-Dictator and Garrick, Sir Joshua Reynolds, Goldsmith Boswell and Edmund Burke were the distinguished members.

The ‘Fifteen’ has produced quite a galaxy of eminent scholars, statesmen, poets and men of letters. Dr Velte had something of the great Dr Johnson about him. His charming personality, his love of the best that has been thought and written and his first hand knowledge of the latest and most ancient classics in art and literature. The members of the ‘Fifteen’ were equally at home in classical literature as well as the Roman and the great apostles and pioneers of modern literature. We liberally surveyed the extensive domains of literature from China to Peru, that is, from Geoffrey Chaucer to Oscar Wilde and from Oscar Wilde to Pearl Buck. Leonard Da Vinchi, Rembrandt, Goethe, Tolstoi, Tagore and Iqbal were exhaustively discussed and criticized at these meetings. Dr Velte was the soul of the whole assembly that met each fortnight and Mrs Velte our chief hostess and patron. None who has been a ‘Fifteener’ can forget those meetings and fruitful and creative discussions. Some of the most distinguished members of the Bar, the Bench, the Civil Services and even those who are in the cabinet on both sides enjoyed this rare privilege and are really proud of it. Mr Mumtaz Hasan, Finance Secretary, Mr Wazir Ali another Finance Secretary; Mr Ata Ullah Kalim, Chief Controller, Military Accountant, Principal M. M. Anwar and great many of the younger and older members of the Pakistan Civil Service and Judiciary like Mian Nasir Ahmad, Mr Mushtaq Munir, Dr Maqbool Ahmad Bhatty, Mr Riaz Ahmad Piracha are all old ‘Fifteeners’ and they carry the unmistakable stamp wherever they go.