Home » A Piece of the Past » Earliest Student Societies 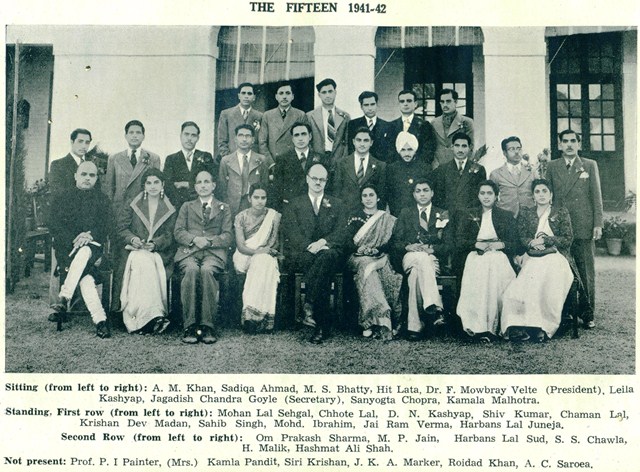 The oldest society of the college is the Debating Society, established in 1887. It organised debates on topics which, surprisingly enough, were mostly political. One topic for a debate in 1905 was: “Resolved that the Indian National Congress has done more harm than good”. (The motion, when put to vote, was carried.)  We also find mention of two rival societies, the Academical Society and the Gladstonians. Every year the two societies met at an annual debate which was a popular and much-awaited function.

There was a Cosmopolitan Society which met every Saturday in Dr Griswold’s room and whose subscription was one anna per month. The Social Service League was founded in 1907 by Mr Fleming. It had no office-bearers and each member was supposed to render some social service every week and report it to the society. These were published in the Folio. Social work meant anything from reading books to the illiterate to persuading people to give up smoking. A proud report ran like this. “I read Fasan-i-Azad loudly to others in order to impress upon them the bad effects of opium-taking.”

A Temperance Society was formed, though we wish to believe it was not needed. Two literary societies were formed in 1889. In 1914-15, we are told, there was a big crop of “crazy gangs” in the college. But, alas, only a few, like “Chaudhary Brotherhood,” “Mota Club” (what weight they carried in college politics we do not know), “Laughing Club” and “Ugly Club” (was membership open or secret?) are mention in the college journal.

The Science Society organised by Mr Shah and Mr Benade was formed in 1915. Next year the most illustrious club, the “Fifteen”, was organised. Its membership was coveted by every student for it consisted of only the best. Essentially a literary group , it produced a number of writers and intellectuals.

There was also a “Fiverise” Society founded in 1916 whose first Secretary was G. L. Nanda, now the Indian Home Minister. A Speakers’ Union was formed in 1919, and Literary Society founded by Mr M. S. Bhatty. The same year the “Economics Club” and the Rice Philosophical Union were established. The Dramatic Club was organised in 1942, although in many later issues of the college magazine the question was anxiously asked: “Where is the Dramatic Club?” The same question is being asked today. The Griswold History Society came into being in 1923 and Urdu Society in 1924.

There is a mention of a Co-operative Sales Society in 1919 with Mr Benade as the man in charge. Its share was valued at Re. 1 and it was compulsory for all students and staff members to buy at least one share and five shares respectively. It must have been a flourishing concern for after two years it also added a cloth and stationery department. It had a confectionary department whose monthly sale, we are told, exceeded Rs. 1,000.