Birth of Lahore College of Art 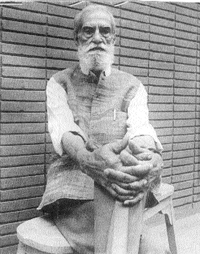 …I also found the studio of art legend Bhabesh Chandra Sanyal, also known as B.C. Sanyal, who gave a new stroke to Indian art. Sanyal, born on 22nd April 1901, is the guru of the art of the undivided Indian sub-continent. In 1937, he set up a studio in the premises of the Forman Christian College, which later became an art school… (This school later came to be known as the Lahore College of Art)

…A few years later, the Lahore College of Art was shifted to the Dayal Singh Mansions of the city, after Sanyal received a positive response and a huge turnout of the most popular artistes when he held an exhibition in the basement of the building. Sanyal remained as the teacher at the Lahore College of Art until India’s independence in 1947, after which he permanently migrated to Delhi…

Text source 1: From Amrita Shergil to Lady Harrison: A Journey Through History, published in Dawn.com by Ali Zaef
Text source 2: World Famous Great Painters by Vikas Khatri
Image source: www.tribuneindia.com
Note 1: Bhabesh Chandra Sanyal was an eminent painter more widely known as the Grand Old Man of Indian art. His preferred medium was watercolors through which he depicted rural life and the struggles of ordinary people among others.