Behind the Brick Wall 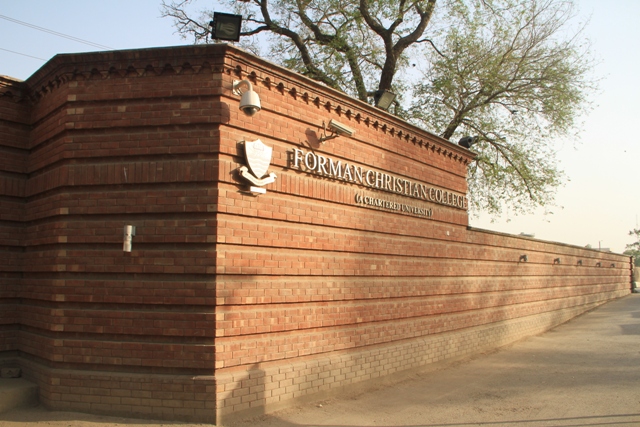 Many stories shared on this space are about students with ambitious dreams surrounding FCC, or with parents passionate about the heritage of the institute—but for me, FCC did not exist until a few months before my admission.

Having lived in Lahore all my life, this may seem odd at first, but FCC was just a hazy illusio. Better known to me as FC College, the mention brought to my mind two main things: “boys” and “matriculation”. Being a product of O/A Levels through and through, I barely thought about it and tried to follow in the footsteps of my peers: I applied to a few foreign universities, and then to LUMS. I didn’t get far enough in the former as my parents disallowed me from pursuing an education abroad, and for the latter, my financial aid application didn’t go through. A month before my final A Level exams, I was devastated—where was I going to go? I didn’t want to be a doctor, let alone an engineer—I really just wanted to study Biology! To be honest, I had my heart set on LUMS—the buildings, the people, every corner seemed so familiar in just a few visits. I was a cell without DNA. So my mother and I were juggling various options in Lahore. She insisted on KC, while I pushed for PU … it was a bloodbath as neither of us was convinced. I had been to both institutes and I didn’t get the feeling I did in LUMS. Call me superstitious, but for me an institute was a whole package—and it all started with the ambiance.

And then, one day we were passing by the all too familiar Zahoor Elahi Road, when my mother asks:
“How about FC?”
“What about FC?”
“I hear they’ve been denationalized … and they have made great strides in the past few years. Even in Sciences.”
“Okay. Isn’t it for boys?”
“Why don’t we find out?”

So that’s when she took a turn and for the first time in my nineteen years of life, I saw the institute in its entirety—not just a brick wall I passed by every other day, but a community, a purpose in itself. I didn’t take long to make my decision. As soon as I went past security and on my way towards N-Block, I knew it: this was it. My future institution. This place was my DNA!

Three years into my Bachelors, it seems funny I thought the two places were the same. They are so very different, and I’m glad they are. Here at FC, I have the opportunity to toy with the boundaries of what we consider possible and real, and I find myself living outside the status quo, learning something new every day. If it weren’t for the liberal arts program, I could never have discovered Psychology, let alone taken it up as a major, finally coming to the point where I can proudly say “normal is boring”.

Toward the end of our companionship, I wonder what I’ll do next?  But I suppose I shouldn’t worry—sometimes it’s just written in the stars.

Author: The author is a Junior majoring in Biotechnology and Psychology, and plans to pursue further education in Neuroscience.