An Interview with Jamila Hashmi

Home » A Piece of the Past » An Interview with Jamila Hashmi 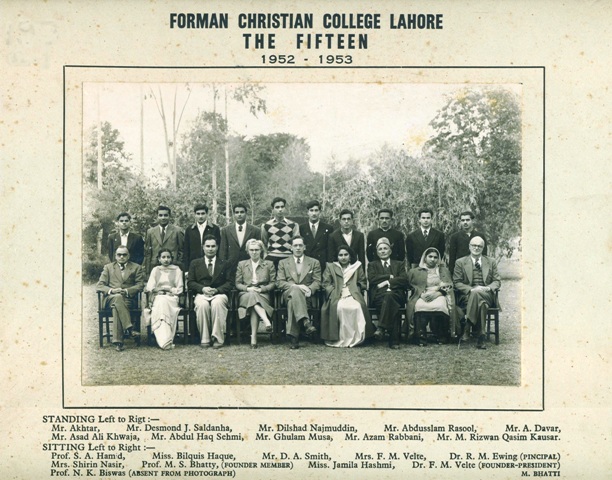 Author Jameela Hashmi did her MA in English from Forman Christian College. She started her writing career by contributing to the student magazine Folio. She was a also member of the prestigious literary society “The Fifteen”. The following are translated excerpts from an interview she gave to FCC students for the Golden Jubilee issue of Folio magazine in 1985.

Folio: What did you study and from which institutions?
JH: I was born in Amritsar and my early education took place there. I did my Matric from Hoshiarpur while living in a hostel. We came to Pakistan at the time Partition because there was so much violence and bloodshed in Amritsar. I did my Intermediate and BA as a private students because after coming to Pakistan I couldn’t get admission into a college immediately. But in 1952 I did get admission, to do MA English at F C College, Lahore. Dr Ewing was my tutor. Dr Velte had previously stopped teaching and gone back to the States, but our batch was the first batch he taught after he returned to FC. Dr Sheets and Professor Biswas were also our teachers at the time.

Folio: Was Dr Enver Sajjad also a student at FC at that time?
JH: No, he came after us.

Folio: You chose English Literature for your MA. Were you especially interested in the subject?
JH: No, I had no special interest at the time. I just decided to join in English, since I had to study something. But once I had taken admission, I became very interested in the subject and I worked very hard. The students of those days used to work like labourers when it came to their studies. We had to take all the notes ourselves, we couldn’t get ready-made notes.

Folio: Why did you decide to join FC College?
JH: I first took admission in Government College Lahore, but I left it to come to F C College because the environment and teachers really impressed me. It was the chance of a lifetime that I could study under Dr Velte, under Dr Sheets. These were teachers who had something to give to their students. You have no idea of the difference between FC College of those days and FC College now. [Ed: The interview took place in 1985 during FC College’s nationalized phase.] When I think about those times they seem like a dream. Our class was held in the upper floor of the Library block. At that time any book would be available in the Library, and all the book shelves were always unlocked. You could take out any book, whenever you wanted. Even if we stayed in the Library all day long, no one said anything.

Folio: Tell us some more of your memories of those days.
JH: Our classes would usually end around 10:00 or 10:30. After that we were free, but we still stayed there. The class atmosphere was very good, there was a family feeling among students. The hostel boys would bring food from the hostel and we all ate together. Dr Velte, who was the Head of Department at the time, used to teach Shelley and Keats very well and in great depth. When he was teaching these poets’ works we felt that we could study them all our lives. Professor Biswas would often tell us recipes for making Bengali sweetmeats and would tell the boys that if you can’t do MA English, you can open a sweetmeat shop. Ali Dawar was a class fellow and a very talented student – he later became a Commissioner. Mrs Iftikhar was also a classmate. In those days there was a very pleasant atmosphere which does not exist in educational institutions nowadays.

Folio: When did you start writing?
JH: Around the same time. If you look at the 1953 Folio, you will find one of my writings in it. I think it was called “Adhooray khwab”. This was the first story I wrote and it was printed in Folio.

Folio: Did you get any encouragement when you started writing? Did you get any inspiration from someone?
JH: At that time the names of Quratul Ain Haider, Hajira Mastoor, Khadieeja Mastoor and Ismat Chughtai were very prominent. I enjoyed reading Quratul Ain. After Partition, her book “Sitaron say Aagay” was published which I really liked. And there were established magazines like “Hoor” and “Zaib un Nissa” in which women had been writing for some time. As far as encouragement is concerned, even nowadays writers don’t get encouragement. It is the writers’ own art which makes them recognized. If there is life in their writing, then the writers and their work will live. They have to do everything for themselves. It is a question of public relations.

Folio: What aim do you have when you write? Do you try to give a specific message through your writing?
JH: When I write, I just write. I don’t have a specific aim when I write. I can’t say that I write to improve society. I don’t want to improve or reform society, I don’t deliberately make society my theme. I think I just write simple stories about love.

Folio: Do you consider someone your literary teacher? Someone whom you are very impressed by?
JH: I think I did my MA in English so that I would learn how great people, great writers, wrote about what they felt. I feel that the great authors I read during my MA English degree are my teachers in writing. And having so many teachers, I didn’t need to make anyone else my teacher.

Folio: Why didn’t you get a job after completing your MA in English?
JH: It was my own decision, not because I wasn’t allowed to by my family. If I could get permission to study, what obstacle could there be for my getting permission to work? My younger sister is working. I thought that if I got a job I would have ten bosses to work for. Wouldn’t it be better to get married and have just one person to work for?

Folio: These are times of material and scientific progress. In such materialistic times, which aspect of literature do you feel is the most appreciated?
JH: Spirituality. Spirituality is gaining ground, even though you rarely find it in literature nowadays. People still prefer to ready spiritual literature. For instance in 1983 once of books, “Dasht-e-Soos: Hussain bin Mansoor Hallaj”. I don’t think any of my other books have had such a reception as this one has. Everyone is critiquing it, some positive and some negative. But in any case the book is being read because it has an aspect of spirituality. After writing this book and seeing how well it was received, I realized that people lean towards spirituality as well. In fact, love and hate are reflections of spirituality.

Folio: Do you remember any beautiful incident from F C College?
JH: For me all that happened at F C College was beautiful. That was a beautiful period of my life. There used to be an English society in those days called The Fifteen. It had only fifteen members. There used to be a meeting every fifteen days, at Dr Velte’s house. Dr Velte’s wife treated us with great kindness and served us with tea and cake. I read a paper in one of the meetings of The Fifteen, titled “The Cultural Development of Pakistan”. Two papers had already been read out before mine in that particular meeting, mine was the third. After listening to it Mr Biswas said, “It is the best paper.” Those days the atmosphere was very good, there were no problems.

Folio: Do you have any message from FC students?
JH: Yes. My message, in fact my plea, is that they should polish their talents and skills well and bring honour to this institution because their alma mater has wonderful traditions and history. 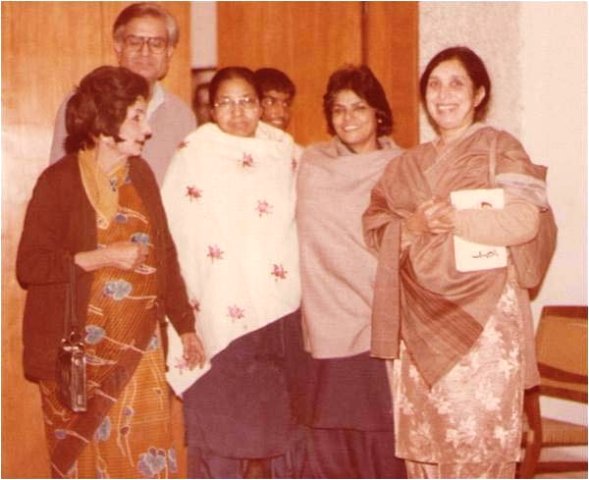